Thanks to the Hungarian Convention Bureau’s successful bid, this year’s first MCE Central & Eastern Europe forum was held in Hungary between 27 February and 1 March 2022. Building on the MICE potential of Central and Eastern Europe, qualified trade buyers from all over the world specially invited to the event met the region’s service providers at 15-minute face-to-face meetings: DMCs, PCOs, convention bureaux, event organisers and venues, agencies, hotels and airlines. Nearly 150 participants from 14 countries attended the event. One-third of the exhibitors were Hungarian. 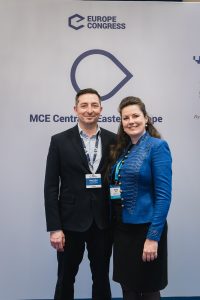 Organised by the Hungarian Convention Bureau and its tender-winning partners – Dynamic Tours Budapest DMC and XTRM Group – the following programmes and venues were presented to the nearly 150 participants from 14 countries to help them discover the Hungarian capital and local flavours: a presentation of the Széchenyi Thermal Bath’s history on its sun terrace; a surprise concert at the Hungarian State Opera and the adjacent Hotel Moments; a Trabant ride from Várkert Bazár via Clark Ádám Square to Dísz Square; a walk to the Fisherman’s Bastion where a folk dance show unfolded; a half-hour cruise on the Danube with a selection of our culinary delights; a tasting of Hungarian wines at the Gerbeaud Café; a walking tour passing by St Stephen’s Basilica, Liberty Square and the Parliament building with a takeaway lunch from Costes Downtown restaurant followed by a dessert at the pop-up stand of the First Strudel House of Pest near the Hungarian Academy of Sciences building. 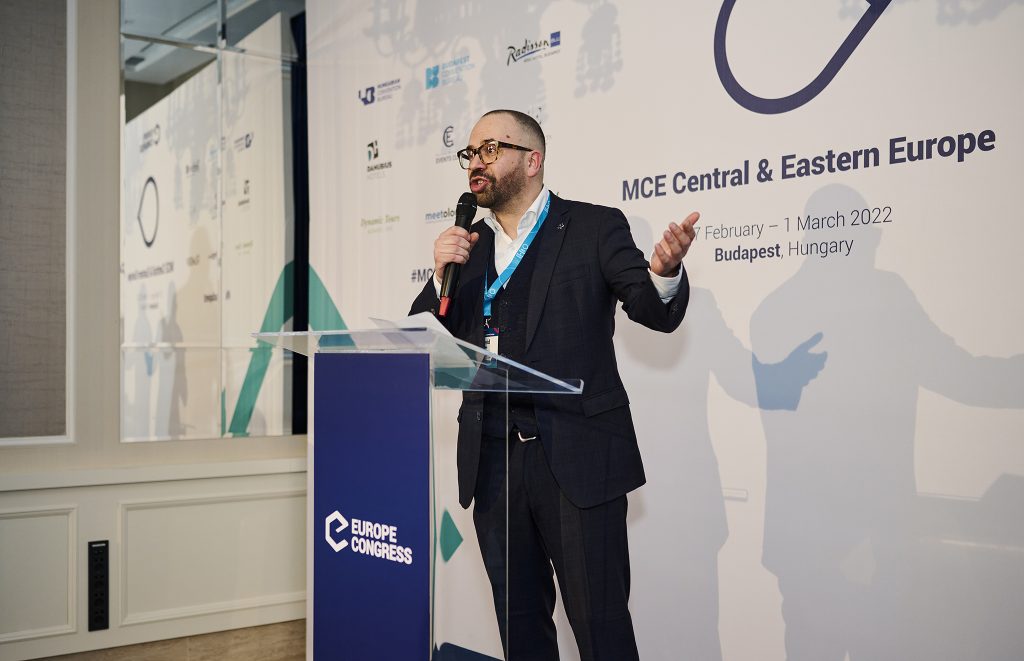 Business transactions and gala dinner
The forum’s gala dinner was held at the Museum of Fine Arts. The event was opened by Anna Békefi, managing director of the Hungarian Convention Bureau, whose speech not only focussed on the importance of personal encounters made possible again but also on the outbreak of war in the neighbouring country. 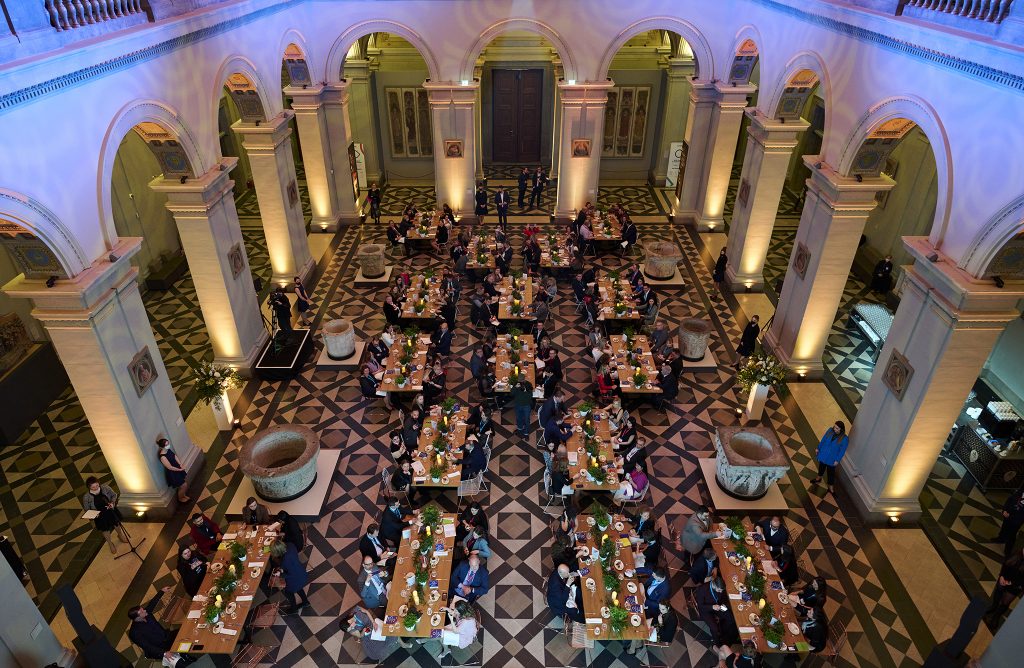 Opening dinner at the Museum of Fine Arts

As Anna Békefi stated: “It is a huge source of pride that only a few months after the formation of our team, we have won the right to organise MCE CEE from among a field of serious regional competition. It was a conscious step to select our professional partners involved in the realisation of the event through a tender procedure, thus demonstrating the Hungarian Convention Bureau’s commitment to a transparent and professional decision-making process. It was very touching to surround our customers – who, after nearly two years’ work were finally able to come for the event – with premium services and an amenable atmosphere, while trains with refugees from Ukraine kept arriving near the event venue. We and our colleagues tried to find the appropriate approach by holding on to the symbolic message represented in the name of the venue, Hotel Peace. It was great to have MCE CEE here!” 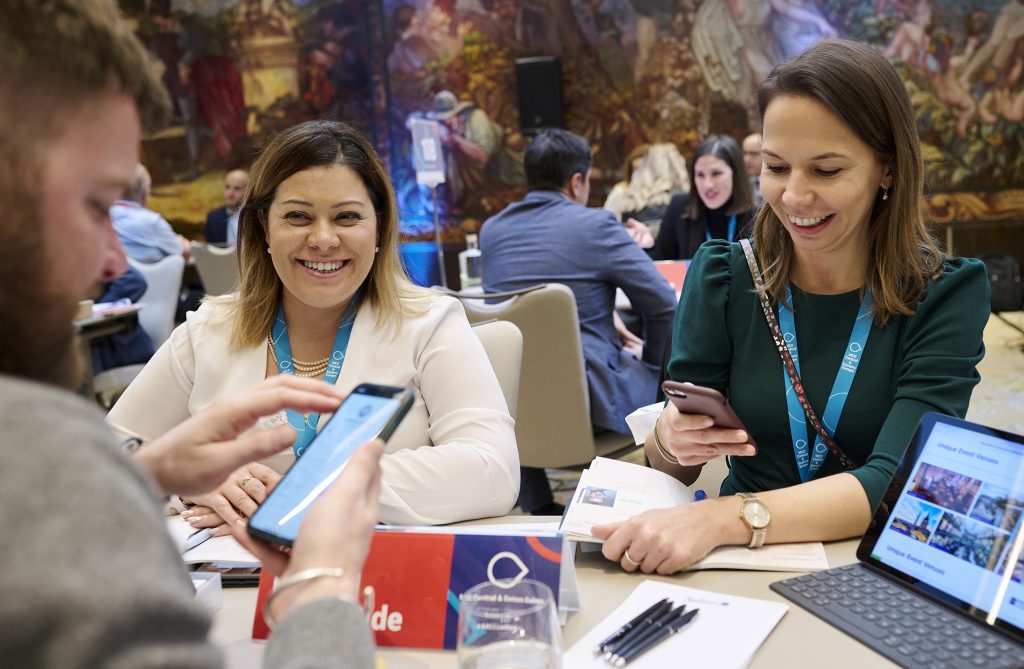 The event programme of the Business Forum started with short presentations of the exhibiting destinations, followed by prearranged 15-minute face-to-face meetings with coffee and lunch breaks also giving opportunities for networking. Qualified trade buyers from around the world specially invited to the event had the chance to consult with the region’s service providers, DMCs, PCOs, convention bureaux, event organisers and venues, agencies, hotels and airlines. One-third of the exhibitors were Hungarian.
At Twentysix Budapest, a mini-concert performed by Veronika Harcsa, storytelling by Figula Winery and plant-a-tree cocktails created in the spirit of sustainability were awaiting the participants from 14 countries.

The commitment to sustainability has been a guiding principle since HCB’s launch; this is also reflected in its brand identity colour, which was a priority in the design of its QR-coded green business cards. The choice of Twentysix Budapest was no coincidence either: in autumn 2020, the tender was already announced in such a way that service providers had to pay attention to sustainability in their applications, thus the use of green elements played a special role in the judging phase.

At the gala dinner held in the Museum of Fine Arts, potted flower decorations adorned the tables instead of cut flowers, and attention was paid to selective waste collection. XTRM Budapest was also selected for its responsible approach: minimising printed materials and hiring only furniture, technology and decorations that could be reused later was a key focus – summarised HCB.